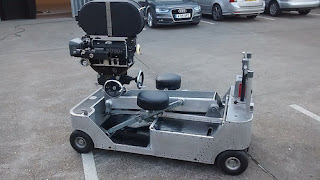 I find it interesting how heavy vintage dolly's really were. Here's a picture of the old standby, the Moviola Crab Dolly which weighed in at 530 pounds. Click on any image to enlarge. 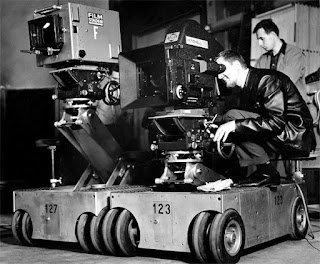 The next dolly of yesteryear was the boxier McAllister which tipped the scales at a whopping 690 pounds! I have read somewhere that the origin of this dolly came from loading bombs/ordnance's into military aircraft. 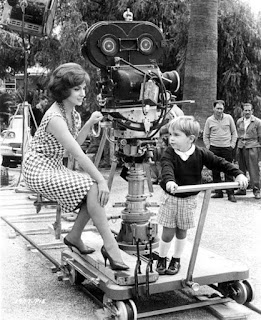 Remember the Dolly-Trolley? Not exactly a crab dolly, but it was great for long tracking shots. No weight specs for this one, but it doesn't look to be too heavy. Pictured here is Gina Lollobrigida and her son taking a break between scenes. 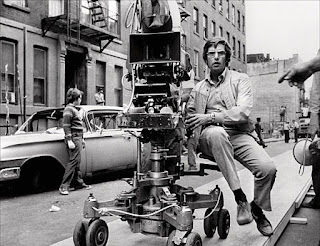 My least favorite of all crab dollies..the Elemack. And by the look of this gentleman's expression, he feels the same way! Click on this image to enlarge.

In my opinion, these were (and still are) the most finicky dollies ever made! They needed constant servicing and always dripped H-fluid. I gripped on a film production in the late 70's and we rented an Elemack that turned into a complete nightmare. To me, the Elemack is just a huge 'tripod dolly' with no platform to work from. This pic is a perfect illustration of that. You see this gentleman has nowhere to put his feet down, they're dangling. Yes, most of the people that used this dolly placed their feet on the legs, but trust me, that gets old! The earlier models weighed in around 200 pounds. The later models came in closer to 250 lbs. 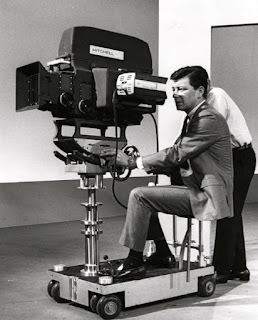 Then there is the smartly designed Colortran Mini Crab Dolly. The Mini Crab came in at only 293 pounds! It was nimble enough to maneuver through a standard doorway and as you can see, allowed for comfortable foot placement. Although William Sargent did not fully intend on designing the Mini Crab Dolly for the larger cameras, it easily accommodated the industry standard Mitchell BNCR and the beast.. the super heavy Panavision R200. 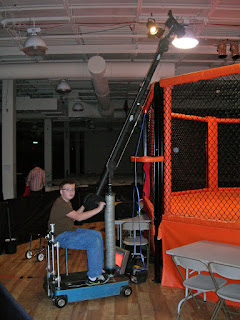 Here's a couple of pictures of my son Adam on Mini Crab #157. At the time, Adam and I were hired out to run second camera at local MMA matches. We actually had a 10' boom that was attached to the hydraulic pedestal so that we could film above the cage wall. 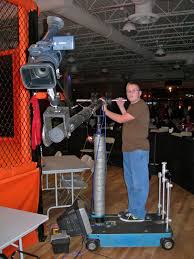 Having a platform to stand on when needed was also really convenient. Adam sat on the operator's seat and stood on the platform when filming dictated. Hands down.. the Colortran Mini Crab Dolly is the best vintage crab dolly ever made! AND...IS STILL an extremely capable dolly being used today! Timeless (and don't forget portable) design! Thanks to it's genius designer/inventor, William Sargent!