How to make money with your Mini-Crab!

Recently, I received an email from Mark L., of Los Angeles asking how we were able to generate income with our Colortran Mini-Crab Dolly. You may have seen some older posts of my son Adam and I using our Mini-Crab for MMA fights, etc. Click on the older post tab at bottom of page.

I found the price list (below) that Adam and I used in the Cleveland, Ohio area. We also offered a Jib, using a Camera Turret Model 300 that we included in our grip package.

You can certainly tailor your price list to include the equipment you have and the type of grip service you wish to offer. Your market may be stronger than the Cleveland area. I hear Seattle, New York City and Miami have a lot of independent projects going on. Once you create your price list, be sure to send it to all the independent producers and ad agencies in your area. I'm hoping this may help to generate some work for you! Let me know of any other ideas we can share with our fellow Mini-Crab owners. Use your mouse and click on this price list to enlarge. 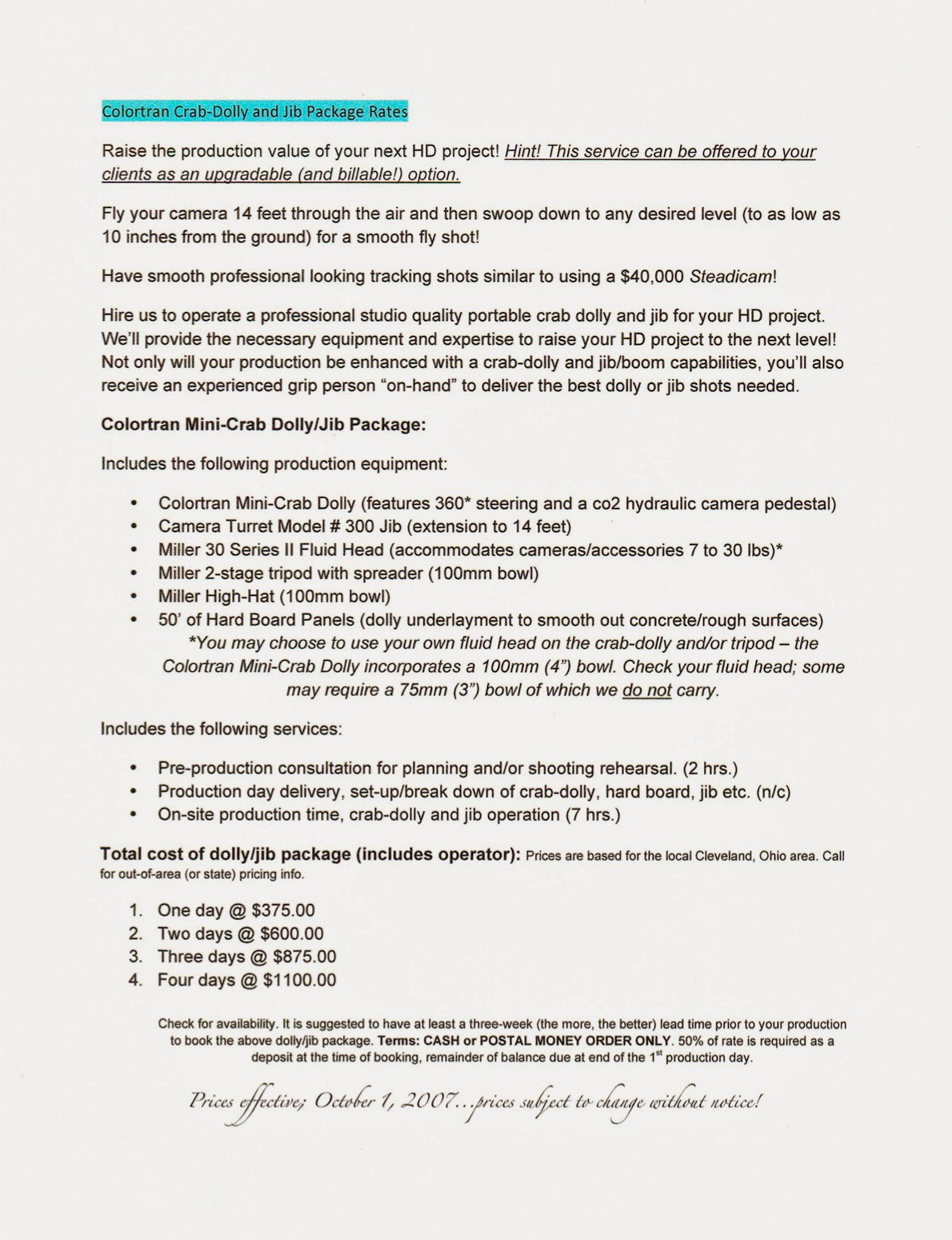 Recently, I received an email (below) from Lee Delaney, Broadcast Operations Manager for Kentucky Educational Television. Lee works with Mini-Crab #225 and I'm pretty sure this is the highest serial numbered Mini-Crab we have registered with the Sarkell Society. 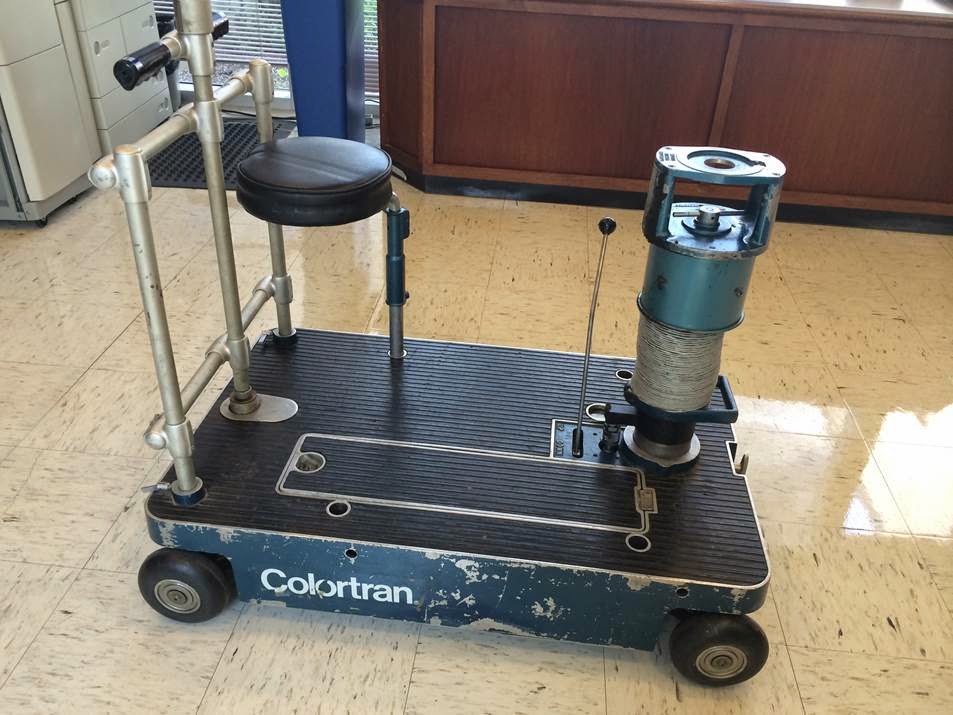 Thanks to Lee for sending these images of #225. Interestingly, I've seen the white Colortran decal shown above in other late model Mini-Crab Dollies. 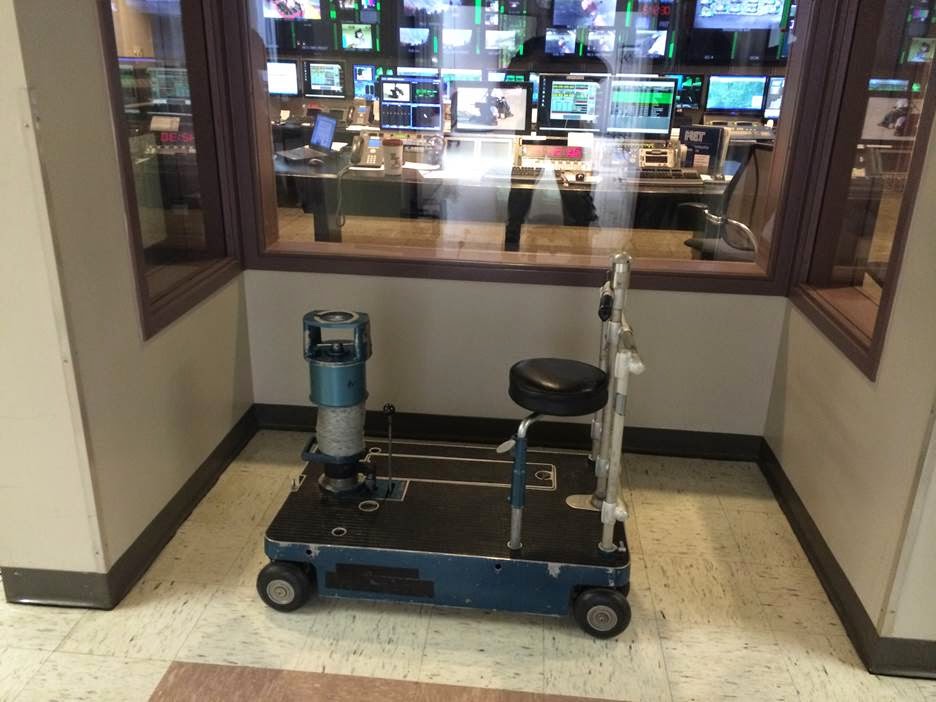 We see Mini-Crab #225 having it's own dedicated parking spot at KET Studios. 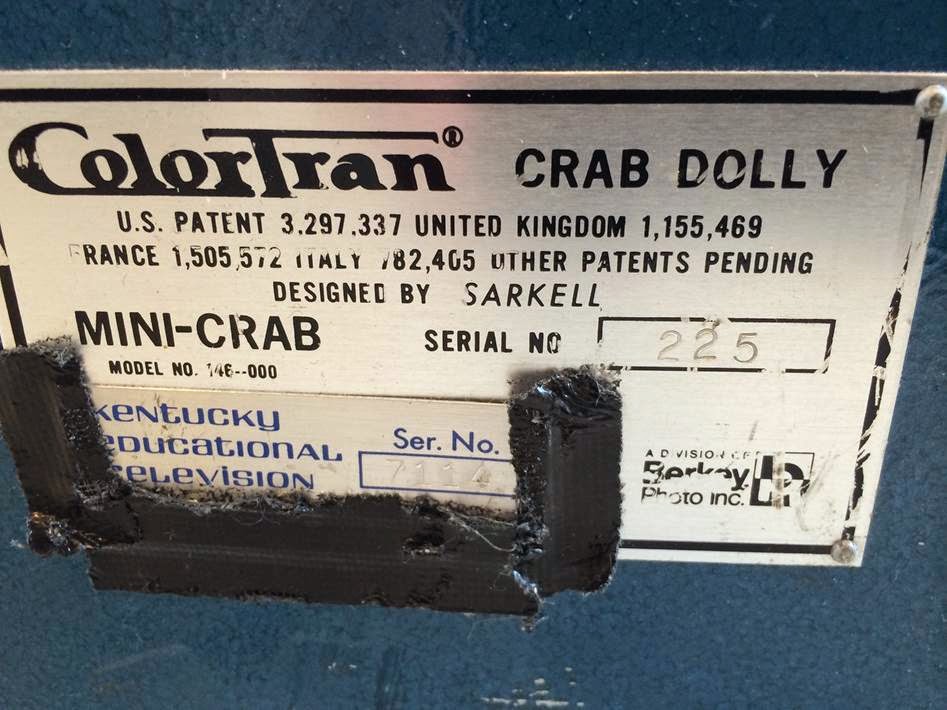 There's no official final build number. It was once reported to me by the former president of Colortran, there were approximately 250 of these built! It's possible, #225 may be one of the last ones to have been assembled!

My name is Lee Delaney and I am the Broadcast Operations Manager at Kentucky Educational Television.  After doing some research, I came across your site devoted to the Colortran Mini-Crab Dolly.  KET has owned one of these for a number of years.  According to the plate, we have #225.  See attached pictures…..  We honestly weren’t aware of the high honor this dolly holds in the industry and that there were only about 250 of these made.

A little about us:  KET reaches 5.5 million people via broadcast and is the largest public broadcasting network in the country, spanning the entire commonwealth and reaching into seven surrounding states through 16 transmitters from our Network Center located in Lexington.  Educational programs including the many incarnations of the GED series for use worldwide were produced here as well as many Arts and Public Affairs programs over the years.

How or when this dolly came into our possession isn’t clear, but it was used on numerous productions over the years.  It hasn’t been used for quite a while, but we still have it complete with seat, sideboards, weights, bottles, and it is still fully operational.

Most notably it was run on the nationally distributed program “The Lonesome Pine Specials” in the late 80’s and 90’s.  It was used as the back of house bump shot between songs with the audience. Frank Simkonis, Producer/Director of Videography, and I (as a Videographer, my first job at KET) were the last folks to operate it for this production.  Recently, it has been dug out of its dark corner to be hopefully used again. 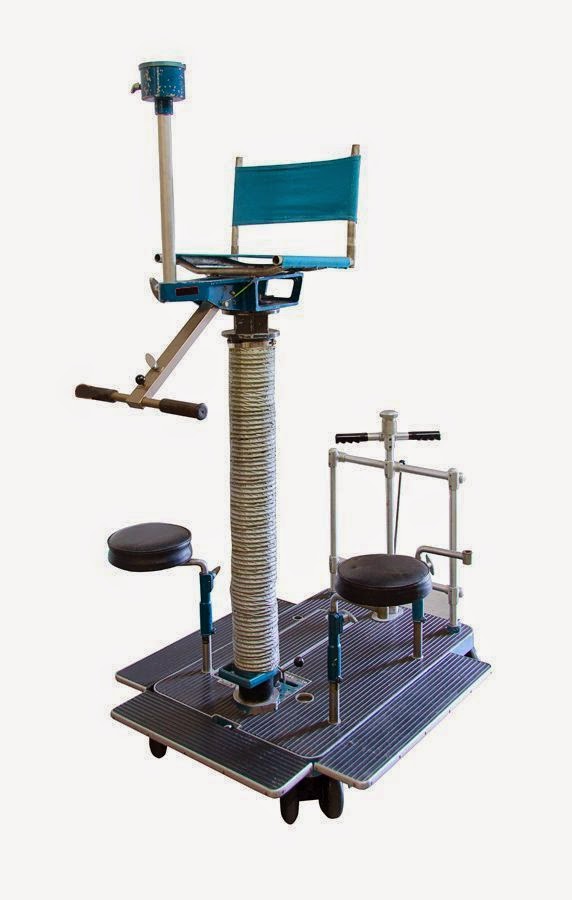 If you're in the market for a Mini-Crab, check out eBay as my friend, Steven Mahoney from Seattle has listed #157. My son and I had the pleasure of owning #157 for many years before selling it to Steven in 2011.

This dolly has great pedigree as it was once owned by the man who brought us 'Willy Wonka and the Chocolate Factory', 'Roots' and TV's 'Welcome Back Kotter'. The previous owner was none-other than Oscar-winner, David L. Wolper.

No doubt, #157 is about the most complete Mini-Crab you can find. Steven was able to track down all the options offered by Colortran. In addition, Steven had a hydraulic company go through this dolly with a fine tooth comb and update the hydraulics. This dolly is up to specs and will give the new owners many years of trouble-free service. 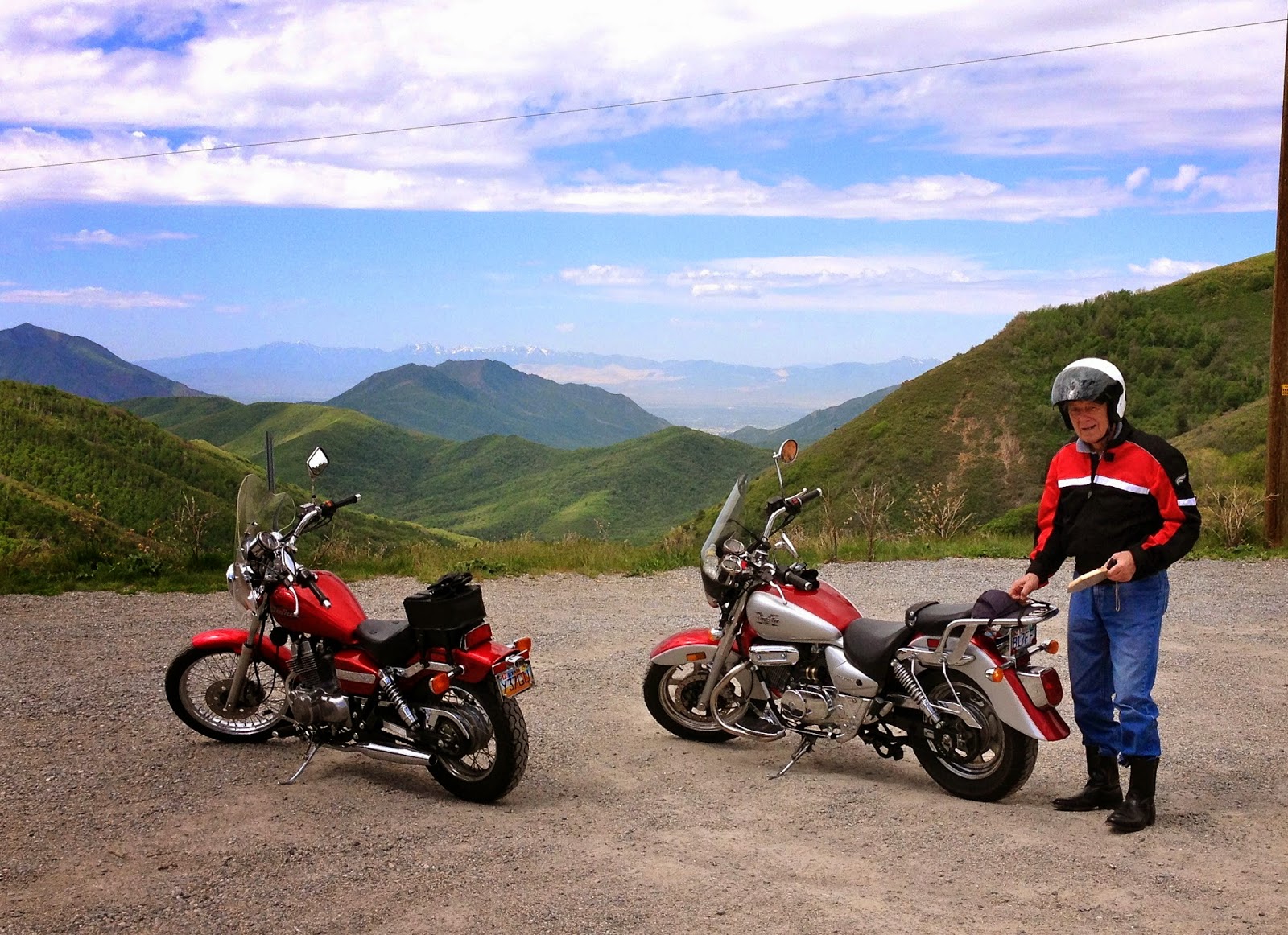 The inventor of the Colortran Mini-Crab Dolly and his good friend, Hal Hansen, took a motorcycle trip through the beautiful canyons in Utah.

This snapshot of William Sargent was taken by Hal during a stop. Both Mr. Sargent and Hal have been friends for some 20-years. Mr. Sargent calls Hal one of the finest sound engineers around!  There's a photo of both William Sargent and Hal on a post dating back to December 2, 2010. Check it out! Also be sure to click on this image to enlarge!
Posted by Greg and Christine Zaryk at 6/07/2014 1 comment: 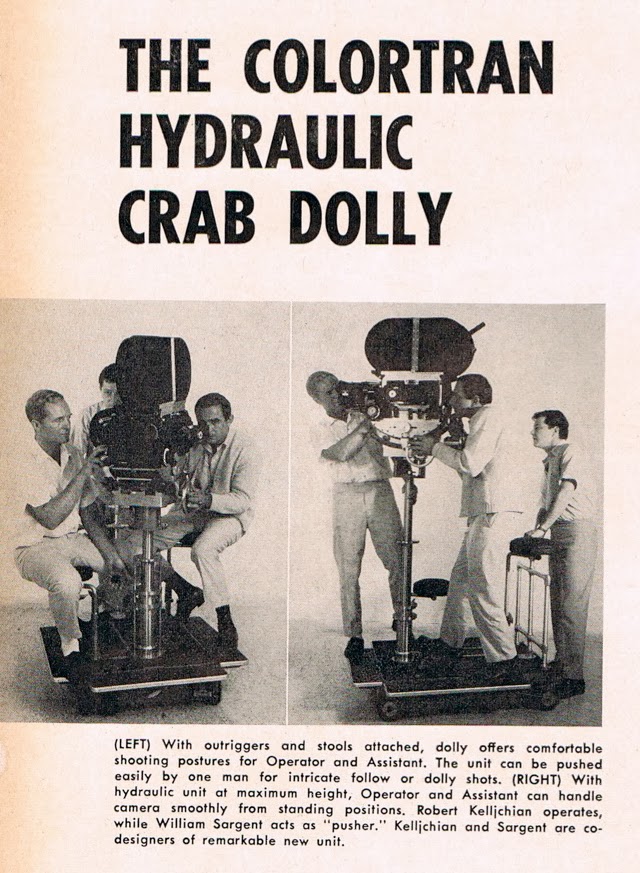 I love these images of William Sargent and Bob Kelljchian. They were taken for an article written about the Colortran Mini-Crab Dolly in the September 1966 issue of American Cinematographer.

It's a little known fact, the Mini-Crab Dolly was originally designed for the lighter 16mm camera systems. As you can see here, there's a beautiful 135 pound Mitchell BNC mounted on the dolly.

A few months ago, I heard from a blog visitor who told me his production company frequently paired a Panavision R200 with a Colortran Mini-Crab.

As many of you film guys know, the R200 outweighed the BNC by 70 additional pounds. He went on to say that the dolly performed flawlessly. The Mini-Crab quickly became a favorite for these much heavier 35mm cameras.

Soon, I will post some interesting information on Mr. Kelljchian, who was not only a trusted friend of William Sargent, but greatly contributed to the making and marketing of the Mini-Crab Dolly. Click to enlarge these images.  Stay tuned...More to come...
Posted by Greg and Christine Zaryk at 2/06/2014 No comments: