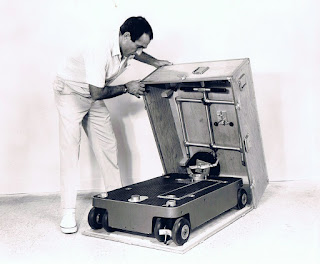 Mr. Kelljan is demonstrating how easy it is to unpack the ColorTran Mini-Crab Dolly from it's carrying case during a Demo shoot. If you click on this image to enlarge, you'll see the seat, steering and shift control assembly and the camera lift control lever is nicely stowed away.

This dolly may quite possibly be one of the very first to roll off the assembly line as there is no evidence of a manufacturers tag.

Mr. Kelljan was a working actor and a successful television director, directing iconic TV episodes of 'Charlie's Angels', 'Starsky and Hutch' and 'Hill Street Blues', to name a few. William Sargent has often told me that Robert Kelljan was the consummate partner and a true friend. 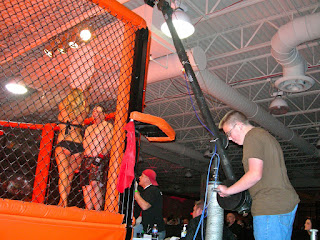 Recently, my son Adam and I were hired out along with our ColorTran Mini-Crab Dolly and a 12' Jib. We were part of a three-man camera crew to film a Martial Arts Ultimate Fighting Exhibition here in Ohio. This is an actual shot of Adam filming the fighter from above the cage with the Jib. Adam is watching his filming through a monitor on the floor. The fighter is waiting for the next round to start as the ring-girl is carrying the round number above her head. Click on any image to enlarge. 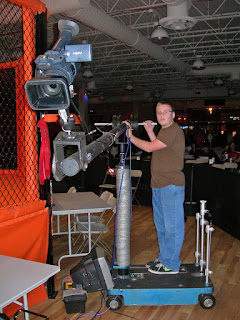 Prior to the show, Adam balanced the 12' Jib-arm with about 50 lbs. of steel weight and then rehearsed our shooting angles. The Mini-Crab works great when using a long Jib. 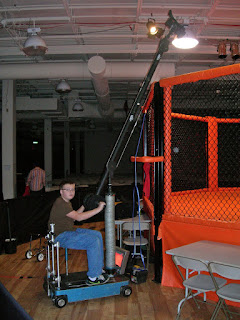 There were a total of 12 fights (about 4 hours of filming!) that we did using Sony 3-CCD HD cameras outfitted with beautiful Zeiss T* zoom lenses. We used our Mini-Crab with a Camera Turrett 300, 12' Jib. Luckily, with the Mini-Crab's hydraulic pedestal fully extended, we just cleared the top of the cage by a couple of feet. We were stationary and the other two cameramen were handholding their rigs, one at the opposite side of the ring, the other roving near the fighters. 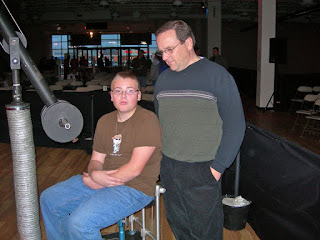 Photo of Adam and Greg Zaryk. Just before showtime, Adam is relaxing on the Mini-Crab. It was fun working together even though we are not fans of the ultimate fighting sport. Adam actually did most of the Jib filming including the final championship match. He's much smoother than I am in panning a high mounted camera.

I'm so amazed with how William Sargent designed the ColorTran Mini-Crab Dolly. It's so compact and versatile that it's effortless to use, disassemble and transport.

I must say, you don't know how perfect this dolly is until you've used it! It's hard to believe that it's almost 50 years old! Way ahead of it's time! A true testament to a marvelous design by a genius designer...William Sargent!
We'd like to hear your production stories using the ColorTran Mini-Crab Dolly. Please e-mail them to me at gregoryz@centurylink.net with a picture or two of the Mini-Crab in use.
Posted by Greg and Christine Zaryk at 11/21/2010 1 comment: 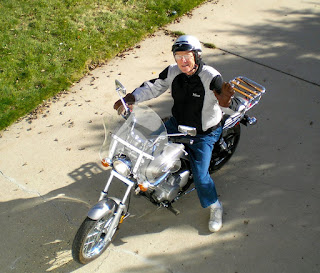 Ladies and gentlemen...the one and only...William Sargent.

This recent portrait of William on his motorcycle was taken by his beautiful wife, Patti.

William Sargent has had an awesome career as a TV/Film actor, voice-over artist and has made an awesome contribution to the film production world with his design and invention of the ColorTran Mini-Crab Dolly.

William is the quintessential man, successful, artistically talented, incredibly gifted in design and manufacture and a great person and friend to many!
As always, click on this or any image to enlarge.
Posted by Greg and Christine Zaryk at 11/16/2010 1 comment:

First Punch Film Production and Mike Broy from St. Louis, Missouri. FPF may have one of the last Mini-Crab's built! 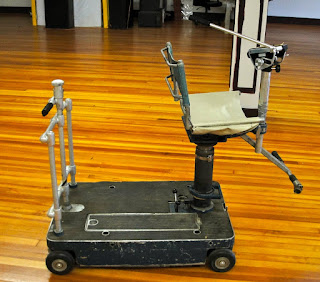 This is Mini-Crab #209 and could be one of the last of the Mini-Crab's that were built at the ColorTran plant in Burbank, Calif. It's unknown, but it's estimated there were anywhere between 200-250 of these magnificent dollies built.

Mini-Crab number 209 is seen here with the accessory seat which would allow the rider/cameraman along with a lightweight camera to ride above the hydraulic pedestal. Thanks for this picture Mike and for becoming a member of the SarKell Society! 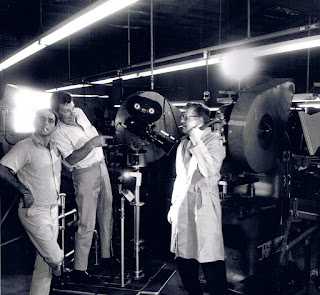 Here's another rare photograph of actor/director, Robert Kelljan (left), along with the designer of the Mini-Crab Dolly and actor, William Sargent (center, standing on dolly), horsing around and having fun with a fellow Berkey-ColorTran employee. ColorTran Mini-Crab Dollies were built at this very location on Chestnut Street in Burbank, California. You can really tell that William Sargent and Robert Kelljan were actors! Click on this image to see their great expressions!
I am very grateful to William Sargent for providing such awesome photographs for our SarKell Blog. Mr. Sargent has been gracious with his time and resources! Thank you Mr. Sargent for all you do! You are a true gentleman and a wonderful friend!
Posted by Greg and Christine Zaryk at 11/03/2010 1 comment: