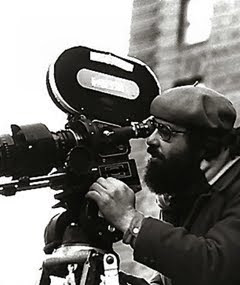 One of the greatest filmmakers of all time, Francis Ford Coppola. Mr. Coppola is seen here behind a Panavised Arriflex 2C and is also known to have a ColorTran Mini-Crab Dolly.
Fellow SarKell member, Steven Bradford, discovered some awesome footage of the ColorTran Mini-Crab Dolly in action. This film footage is from the production of 'Filmmaker: A Diary' which is a documentary of Francis Ford Coppola that was produced/filmed by George Lucas.
In this footage, you'll see Mr. Coppola's ColorTran Mini-Crab being used during the time he was filming his movie, The Rain People. You'll see perfect footage showing how compact, nimble and swift the Mini-Crab is during film production.
It was told to me by the past president of ColorTran, that Mr. Coppola ordered a Mini-Crab Dolly soon after they became available. I'm planning to reach out to Mr. Coppola to find out more about his Mini-Crab and to invite him to become a member of the SarKell Society. More news to follow in a future posting.
Copy and paste this address in your browser to see the ColorTran Mini-Crab Dolly at work: www.youtube.com/watch?v=A2qqIzwjiIQ
Posted by Greg and Christine Zaryk at 12/27/2010