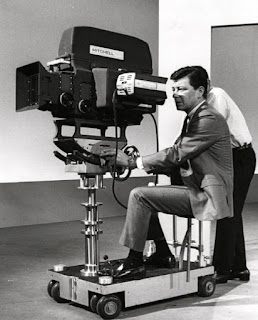 In the photo above, the SarKell team is demonstrating the Mini-Crab prototype for it's first public unveiling at The Hudson Hotel in NYC.

The distinguished looking gentleman peering through the Mitchell is the genius designer/inventor of the ColorTran Mini-Crab Dolly, William Sargent. Pushing the Mini-Crab prototype (partial view) through the "mock doorway" is his partner Robert Kelljan. Both men were working actors in Hollywood when they teamed-up as SarKell.

The Unveiling of the ColorTran Mini-Crab Dolly - By Joseph P. Tawil

The fabulous new light weight dolly was first shown in New York in 1965. There was nothing quite like it in such a compact package. The dolly could crab, steer or track, had a hydraulic continuous smooth lift, and carried camera operator and assistant, all on a platform that could go through a small doorway. Big dolly performance in a light weight portable dolly that could be packed into a road case and placed in the trunk of a station wagon. The way Bill Sargent designed it to come apart, and to go together so quickly was brilliant. Film production was becoming more and more mobile and the SarKell dolly was the solution. We were all very excited about the debut scheduled in New York and we needed a hotel with a ballroom having smooth wood floors to show of the dolly’s smooth movement and to provide some refreshments for our invited guests.

We chose the Henry Hudson Hotel on West 57 Street, for its wood floor ballroom and convenient midtown location. The date was November 9, 1965. We arrived early, set up the room and we were all ready for our invited guests. We being, Bill Sargent (designer), Bob Kelljan (SarKell partner), Herb Hollander (my sales manager), and Joe Tawil (that’s me). A few people started showing up at about 3:00 p.m. and I was having a ball showing off the, tracking, steering and crabbing options; the smooth hydraulic lift, and how it all came apart to fit into a compact road case. Both Bill Sargent and Bob Kelljan officially demonstrated the dolly as shown in the photo above. It was now named the ColorTran Mini-Crab Dolly.
All was going well and more people were arriving. A little after 5:00 p.m. the lights went out in the ballroom. I was sure it was just a fuse and they would soon be turned on again. After a while the hotel staff showed up with a box of candles and I thought they were really so incompetent they didn’t know how to replace a fuse. However I was not going to be deterred. Top New York production people were in the ball room to see the dolly and I was going to show it. We lit the candles and placed them around the room. We also held the candles in our hands. When I needed to demonstrate a function of the dolly I handed the candle to one of our guests and said "hold this so I can show you how this works".
What we didn’t know was that date, November 9, 1965, was another event about to hit New York at 5:27 p. m. It was the great north eastern blackout stretching from Canada to Philadelphia and just about everything in-between. We had no idea of the extent of the blackout. We thought it was just the hotel until some guests arrived to tell us it was much bigger that they had driven from their office on 32nd Street to 57th Street and that the lights were out all the way. Remember this is before the cell phone and as much as we were in the dark, the authorities did not know much more about what was happening. There was no TV, no Radio – there was no electricity – It is interesting to note that NBC had battery back up for the radio station but it ha been removed only weeks before the blackout) - we were all in the dark. But not me, we had candles, we had guests and fortunately some food and beverages laid out. We went on showing the dolly and took orders for 32 units that day. We knew we had a winner.
The dolly was a great success, I had a lot of fun and satisfaction seeing it used around the world. We shipped dollies to Latin America, Europe and Asia. As exciting and as satisfying as it was to be part of this adventure I had one more blessing from its launch. I got to meet Bill Sargent and we have been life long friends. That is more than icing on the cake.
We wish to sincerely thank fellow SarKell Society Member and former Berkey-ColorTran president, Joseph P. Tawil for this great account of showing the ColorTran Mini-Crab Dolly for the very first time.
Posted by Greg and Christine Zaryk at 10/18/2010