William Sargent and the Mini-Crab Dolly

In a future post, we will be taking a closer look at the acting career of William Sargent. Not only was William Sargent the genius designer and inventor of the Mini-Crab Dolly, he was also an accomplished actor, leaving his mark on both stage and screen. Soon, we will be posting awesome photos of Mr. Sargent in some of his memorable acting roles.

But first, here are two very rare business cards. Click on the above image to enlarge. The card on the left was printed as Mr. Sargent and Mr. Kelljchian (better known as SarKell or Sarkel as noted on the card) were preparing for the SMPTE show in Los Angeles (as seen in the photos below). This was when SarKell first unveiled the Mini-Crab to the Hollywood film community.

The card to the right was used by Mr. Sargent after a deal was struck with Berkey-Colortran. Mr. Sargent was retained as the Project Manager during the initial manufacturing and marketing of the new Colortran Mini-Crab Dolly. 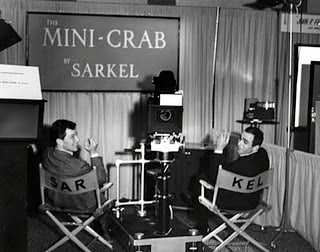 Here are a few pictures of the Mini-Crab prototype before being discovered by former Berkey-Colortran's President, Milt Forman. 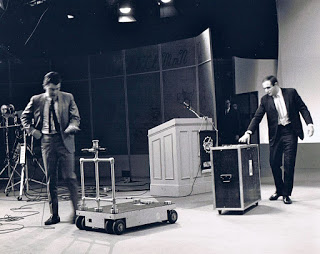 A live shot of 'Sarkell", William Sargent on the left and his partner Robert Kelljchian on the right during a demonstration of the Mini-Crab Dolly in LA. 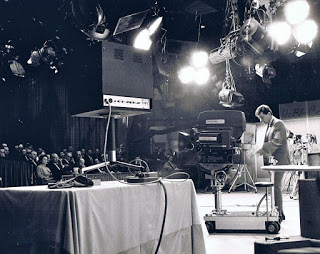 William Sargent, the designer/inventor of our favorite crab dolly with the actual 'Mini-Crab' prototype he built by hand in his Los Angeles apartment. It doesn't get any cooler than this, ladies and gentlemen.
Posted by Greg and Christine Zaryk at 7/28/2015